18 July 2019
Russian programmers
IT news
Imagine a city populated exclusively by programmers. They communicate via Telegram and ride in driverless taxis. One such city of silence already exists in Tatarstan, but it’s unlikely to appeal to extroverts.

Russia’s youngest city, Innopolis, was conceived as a place where future IT gurus would study, and the region’s leading specialists could work. It is located about 40 km from Kazan and 800 km east of Moscow on the picturesque banks of the Volga River.

In effect, the city consists of a university resembling a spacecraft, a campus, a “flying saucer” Technopark, some 30 apartment blocks, a sports complex, a medical center, a couple of grocery stores and several cafes. All in all, it covers an area of 2.2 sq. km. 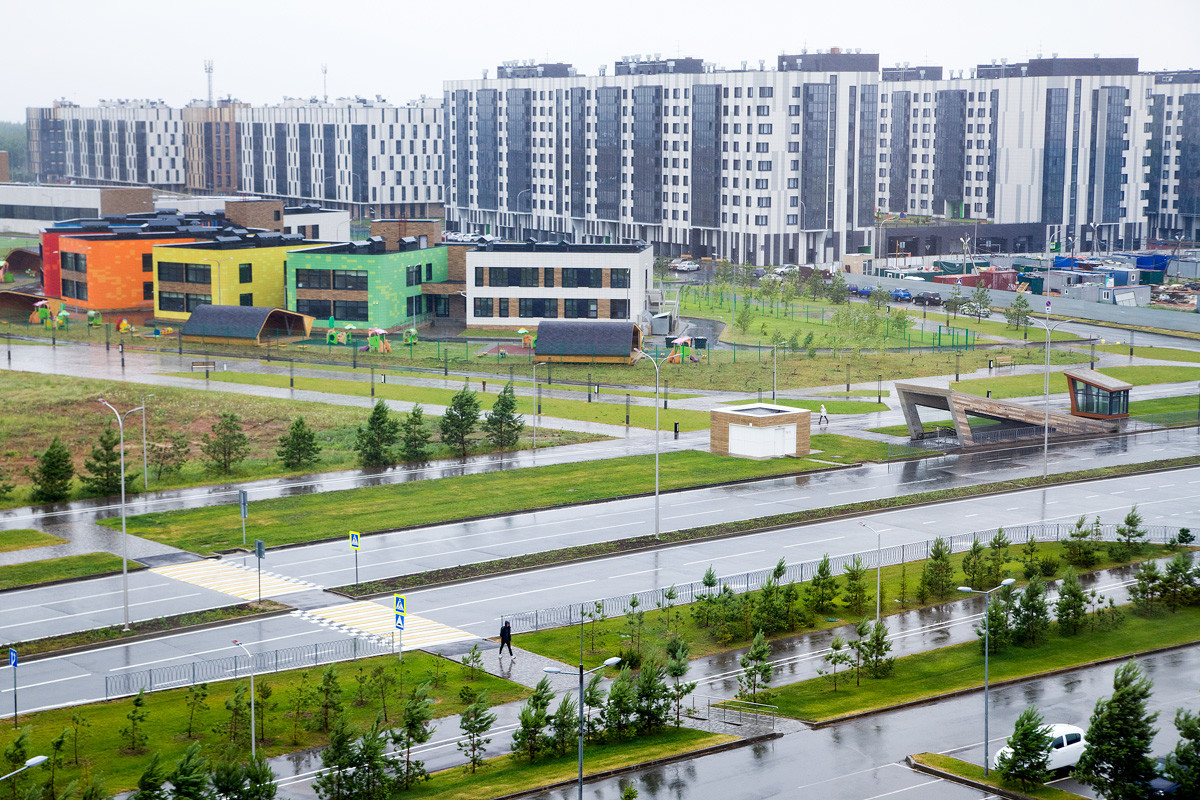 The view from Technopark on apartment blocks.

Even when all the students and commuters are in town, city streets seem empty: there is practically no traffic and few pedestrians. So where is everyone? It turns out that local residents prefer to communicate via Telegram, and when they do venture outside they test driverless cars as free taxis. We managed to catch a few residents and find out more about their life in this ghost town, and about what is happening here.

Inside, the university is even more impressive than from the outside: glass walls, auditoriums that seem to hover in the air, as well as many cozy places with armchairs and beanbags. Furthermore, students do not even have to go outside: the campus is connected to the university by a covered passageway. 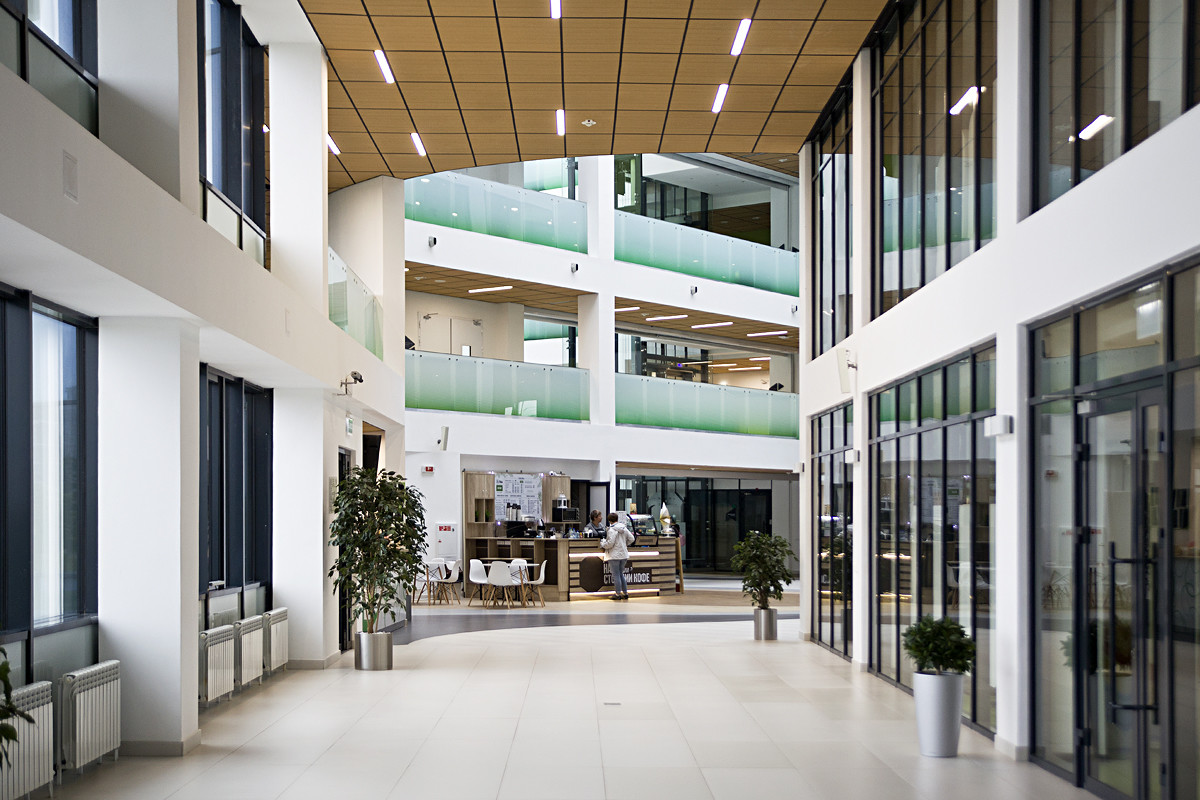 The competition to get accepted to this university is tough: students (600 at present) have to go through a rigorous selection process, including an interview in English since all the teaching is done in that language. After graduation, students must spend at least a year working in any of the Technopark companies. 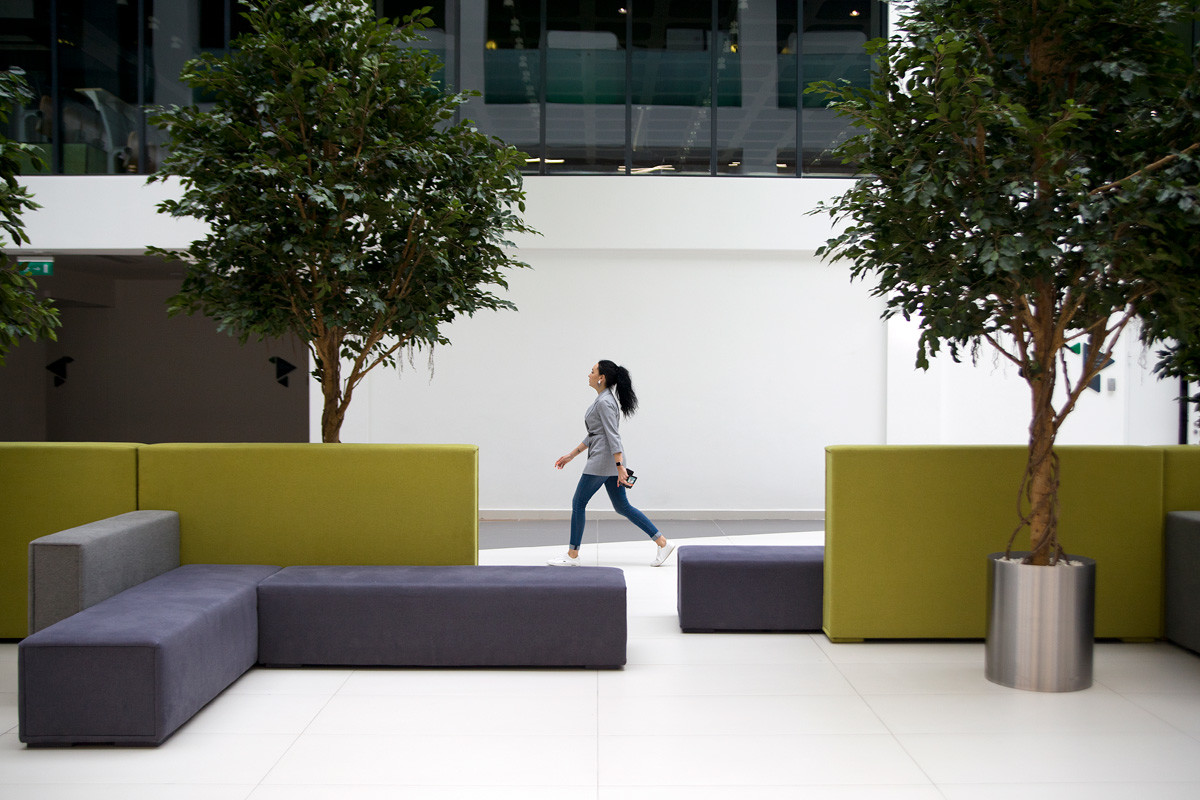 The hall at the university.

Daniel Atonge, 21, came to Russia three years ago from Cameroon. First, he spent two years at the Russian Technological University in Moscow, but then his friend told him about Innopolis, where he could study in English, and he decided to move here. “This university is looking for people who going to change the world of computer science,” he says. Take a look at his red sweatshirt – he made it himself. 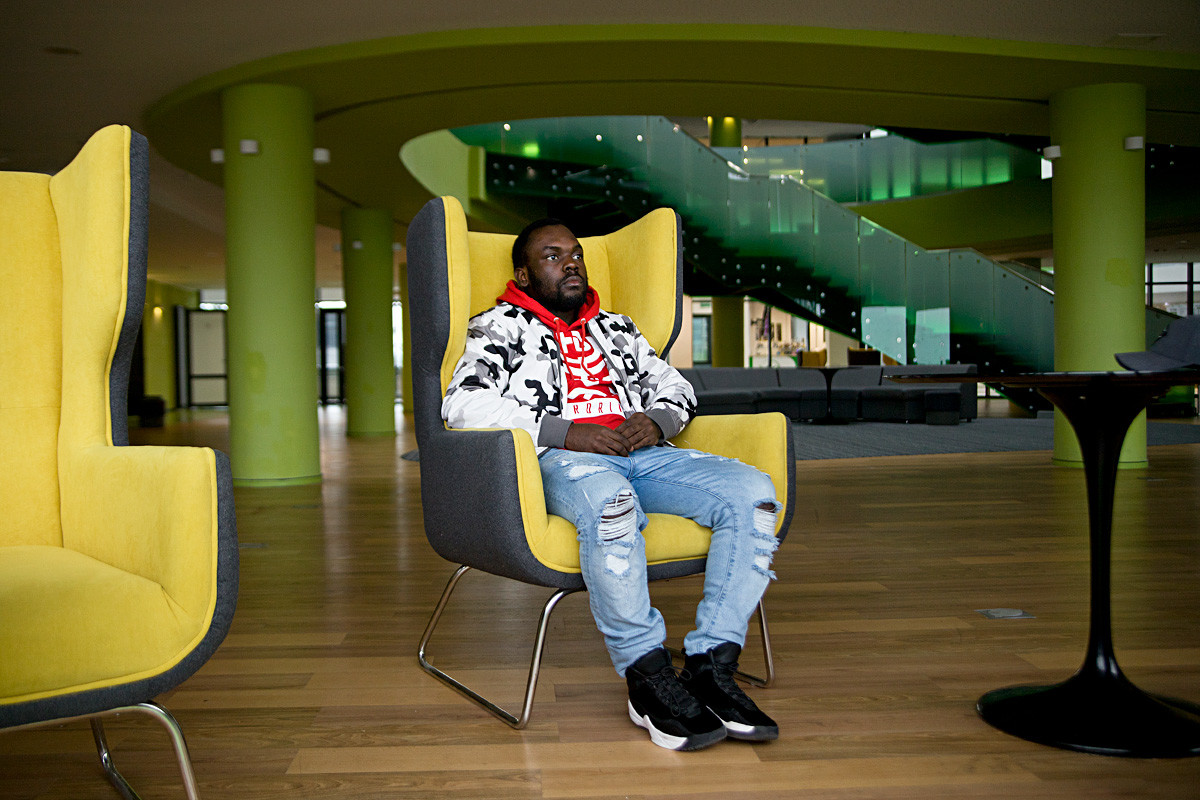 Daniel speaks Russian well but is glad to study in English.

“One of my ideas is how to use AI in dresses. Just imagine: you have a picture of what you want to see on your dress and you give this picture to an AI system to print. This idea can be sold, for example, to H&M. Like many others, Daniel is an A-class student. “Here we have recreation activities and cozy bars, but I prefer not to go out at night; I need to study.”

Ekaterina Uzbekova is 20 years old. The cheerful redhead comes from the small town of Neftekamsk and has an enthusiasm for developing apps for iOS.

“When I entered this university, I had no idea what we would be doing here,” she says. “At first, I was completely stunned by the workload and I had trouble with my English, although the language barrier is completely gone now. I am studying with students from France, Italy, Spain, America – it’s very cool.”

Ekaterina admits that sometimes she feels lonely: “Sometimes everyone is sitting in their rooms, studying and studying. Swots!” She herself has just completed her second year, and has already received several job offers at the Technopark. 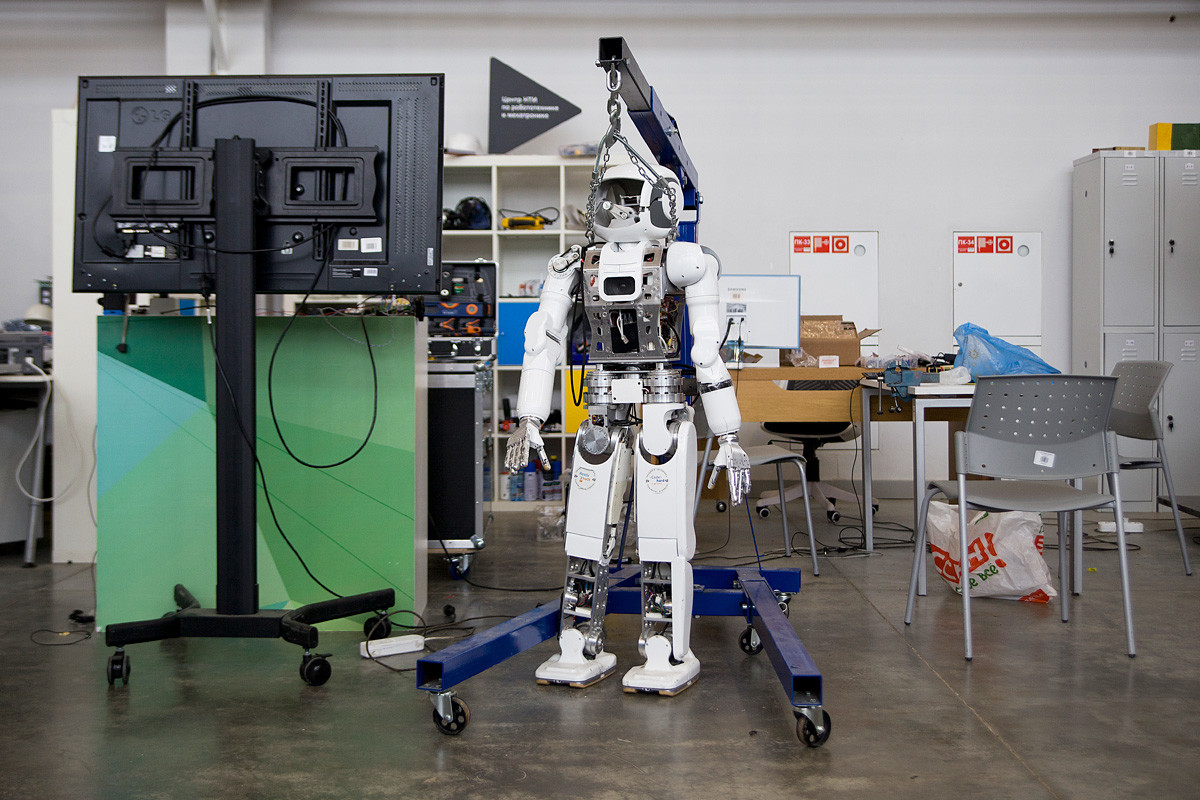 Meet Archi the android developed in the university’s lab.

‘For those who love work, and peace and quiet’

The Technopark is essentially a huge corporate center, with offices occupying several circular floors. It houses the IT departments of major retailers, banks and other Russian and international companies. 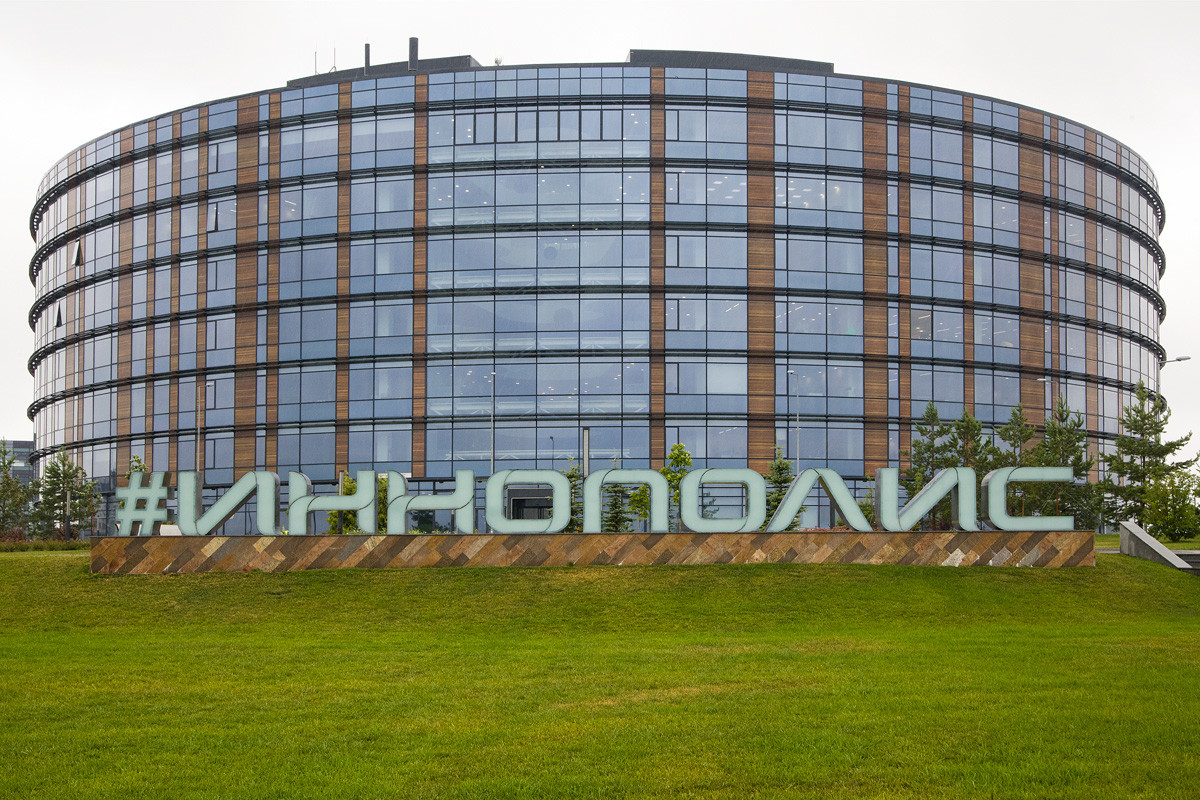 The main entrance to the Technopark is decorated with the huge “hashtag”.

“We like everything here except the wind,” says a tall man in an expensive suit. Ernest Syuch, business development director at Indusoft, which makes software for industrial production, comes here on short visits; the company’s head office is in Moscow. “This is an ideal place for those who love silence and concentration because any place is within a two-minute walk and there is nothing around here to distract you from your work,” he explains. 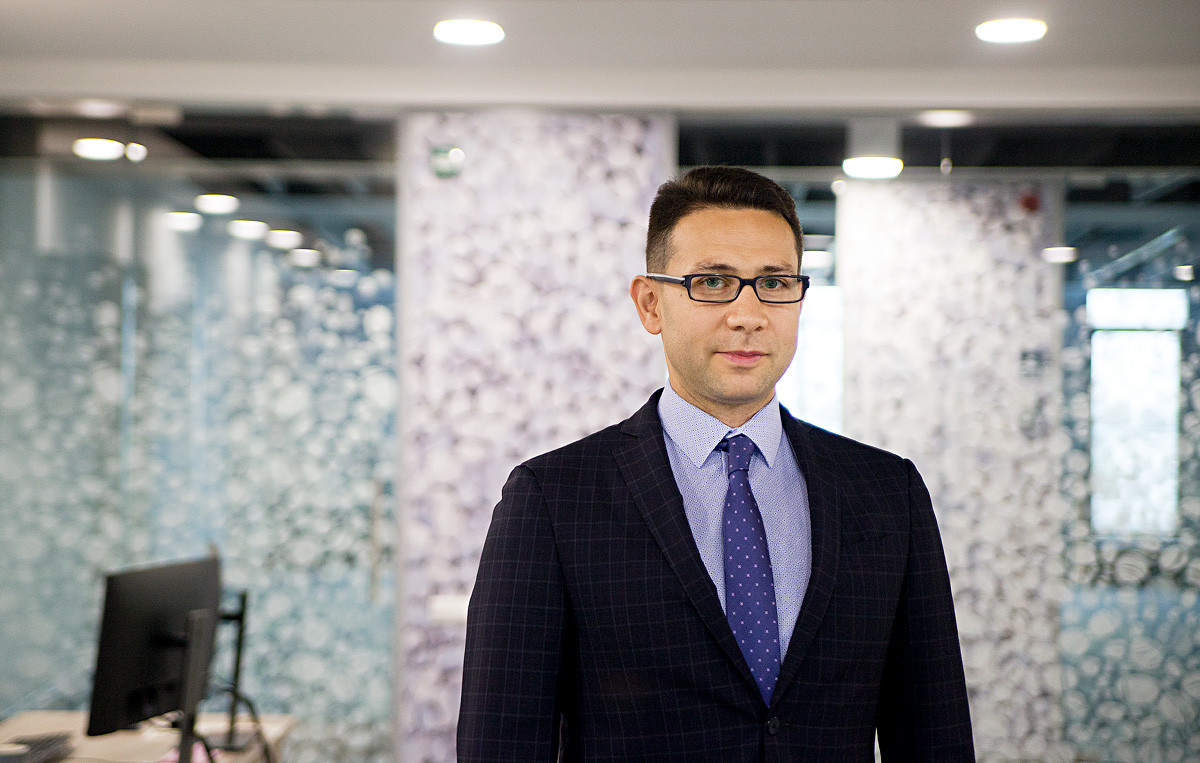 “We wanted to open an office at the Skolkovo Innovation Center in Moscow, but we didn’t like it there – it was all about glamour and fashion. Innopolis, however, is about business,” he says. “Besides, in Tatarstan, decisions on project implementation are made much faster.” 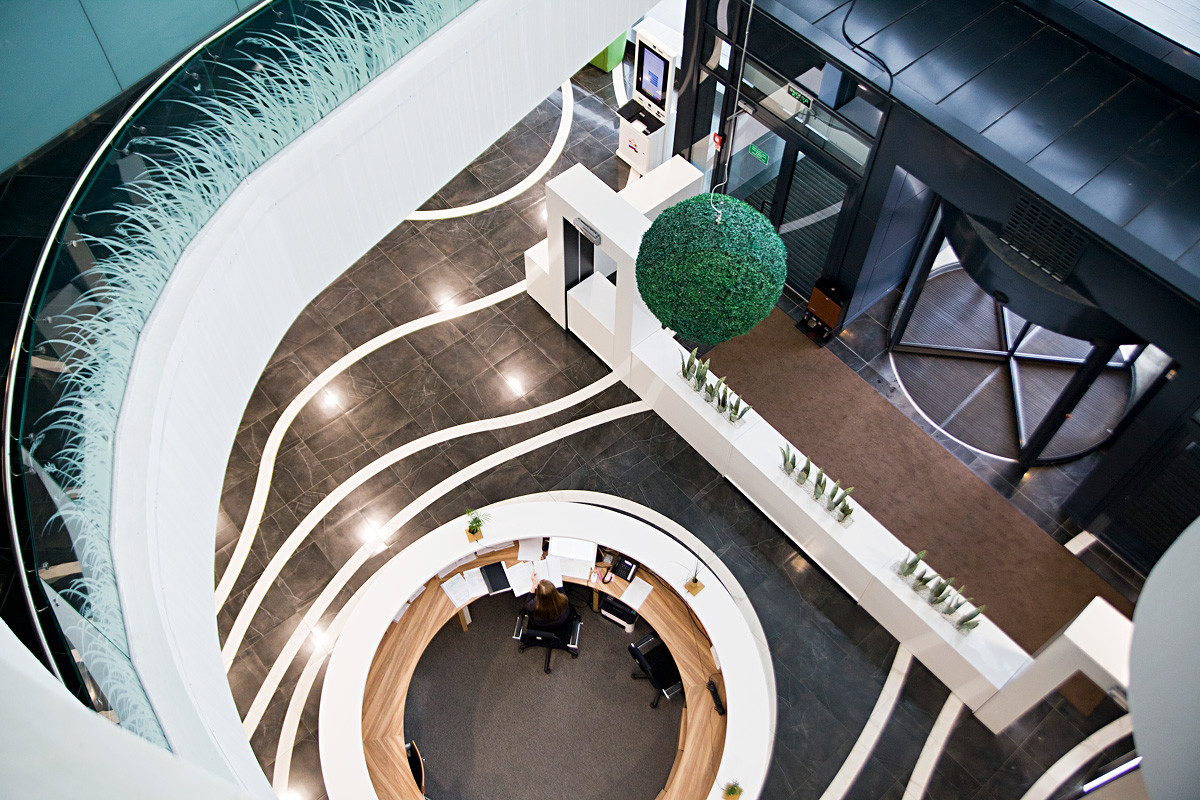 Inside Technopark. Everything is made in eco style and decorated with real greenery.

A paradise for locals?

Innopolis also has its permanent residents, and those who come here work in various industries. Mostly, people move here because of better pay: an IT specialist is offered a salary comparable to that in Moscow, whereas living expenses are significantly lower than in the capital. In addition, many companies pay the rent and medical insurance for the whole family. 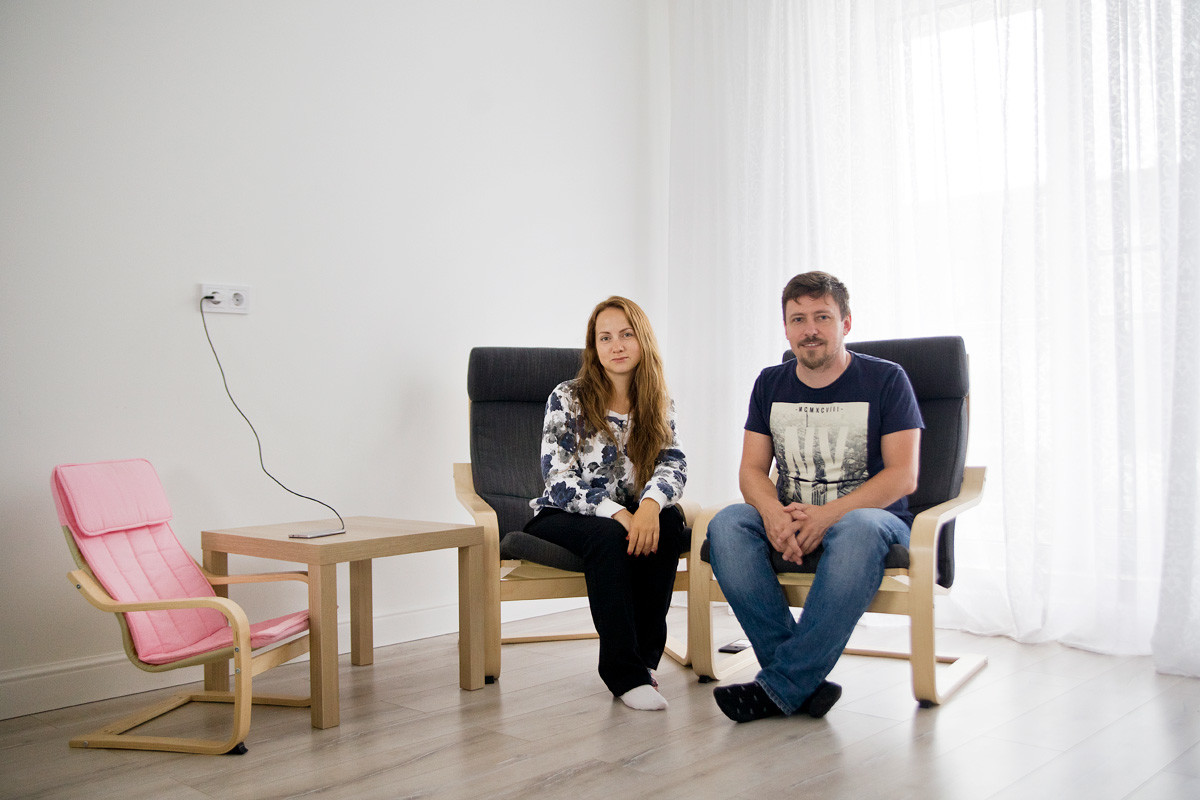 Natalia and Alexander moved to Innopolis in 2016 from Naberezhnye Chelny, another city in Tatarstan. They took out a mortgage to buy a spacious (145 square meter) two-bedroom apartment in a new block of flats. It cost 7 million rubles ($110,000): in Kazan they would have paid 50 percent more, and in Moscow such a flat would have cost three times more. 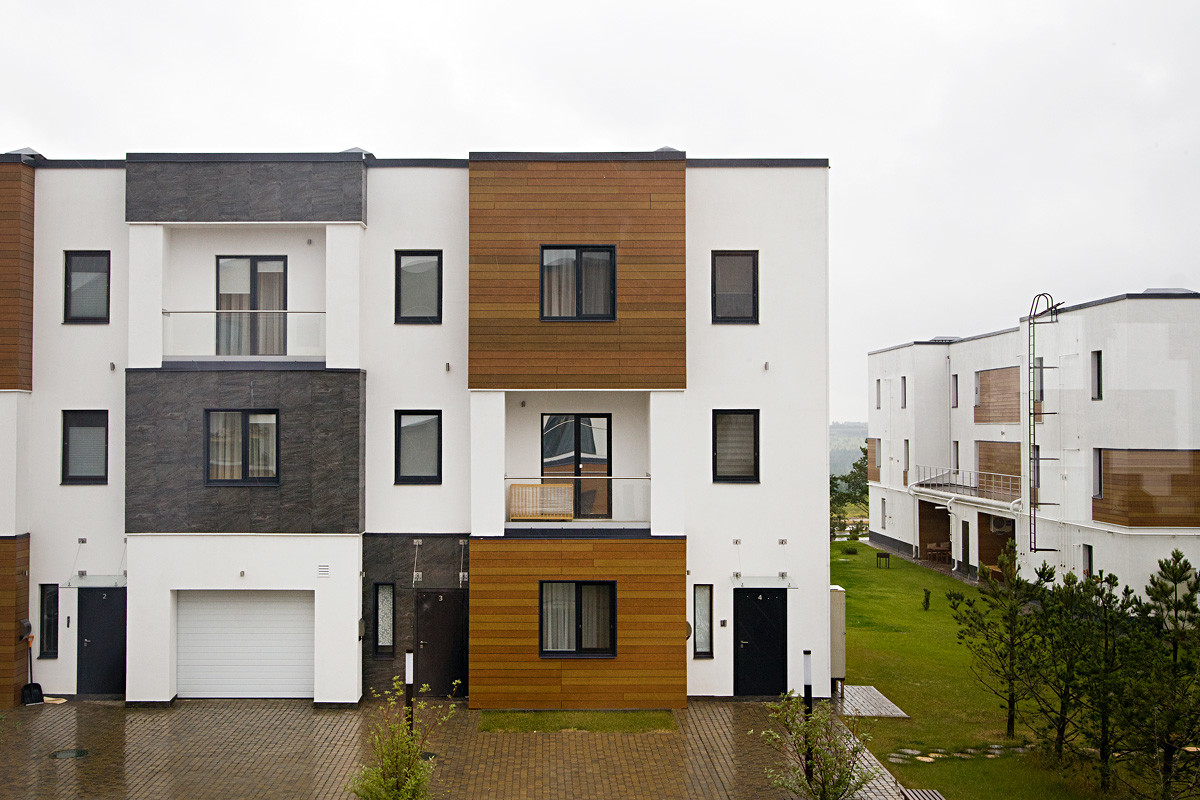 Both work at the Technopark and love traveling. They are the only residents of Innopolis who rent out an apartment on Airbnb. “We welcome students and visitors to the city to stay here, although there are some issues around accessibility,” says Alexander. “Trains do not stop here, so people have to travel via Kazan.”

Natalia notes that her parents were also inspired by Innopolis and have bought an apartment nearby. 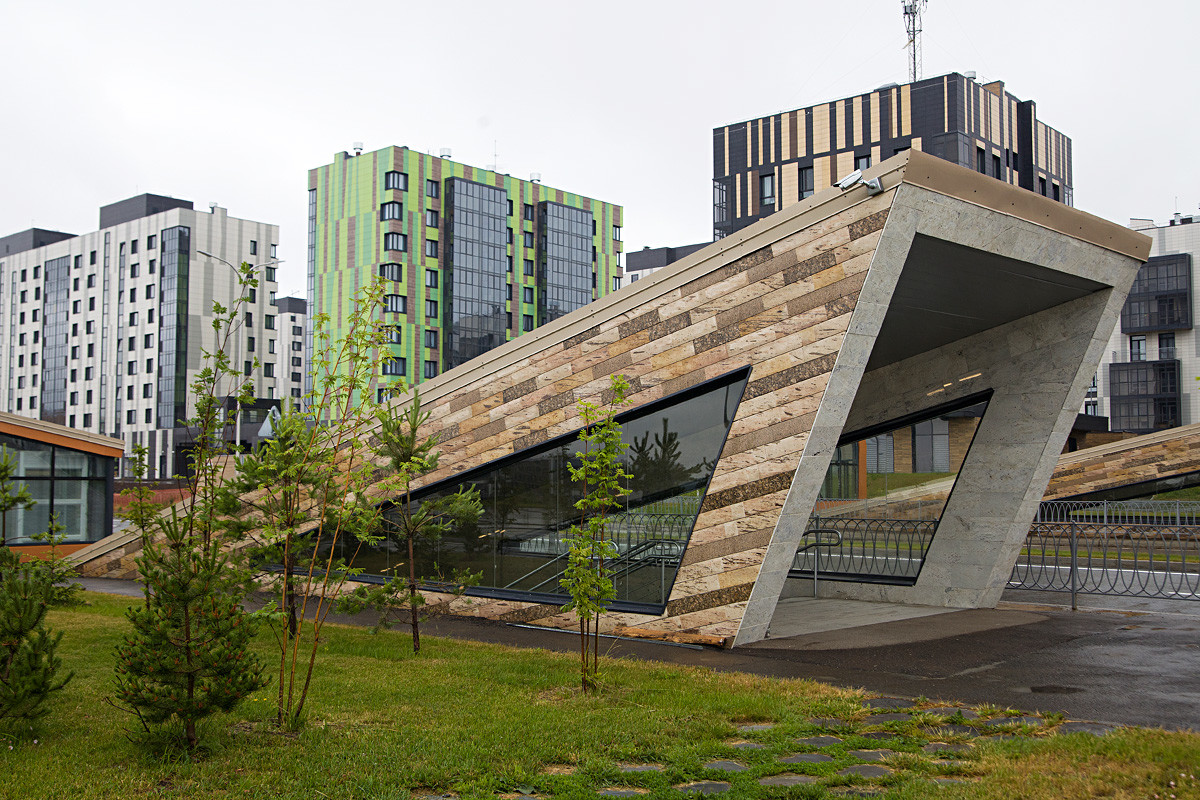 The couple do not feel a lack of communication – they are members of dozens of local groups on Telegram. Furthermore, if any local resident feels the need to talk to someone they can contact a 24-hour concierge service. Employee Snezhana Aleyeva says she gets unexpected queries that range from requests to “help open the door to the bathroom,” or “do my kid’s homework,” as well as questions like: “I’m going to Kazan. Do I need to take an umbrella with me?”

Should anybody find communication with a concierge service too challenging, they can always turn to the virtual concierge, Inna, a Telegram bot developed by university students.